For at least a little while late last week, Lockhart was a winter wonderland as a cold front that swept through South Central Texas brought more than an inch of snowfall, prompting school closures, snowman construction and myriad photo opportunities on the courthouse lawn.
Snow began to fall in the area early in the evening on Dec. 7, and freezing temperatures allowed for accumulation that didn’t begin to thaw before mid-morning the next day, prompting Lockhart Independent School District to join a number of other area districts in cancelling classes that were rescheduled for Feb. 19, LISD public information officer Christina Courson said.
Martin Ritchey, chief of the Caldwell County Office of Homeland Security and Emergency Management, said the area was prepared and his office was not caught unaware despite a number of weather forecasts that missed the mark, forecasting only rain.
“The potential for snow was there,” Ritchey said. “We usually look to make the decision to close schools by midnight, but beginning as early as 6:30 p.m. (Dec. 7) we were able to see conditions were going to make things difficult the next morning.”
Snowfall accumulation occurred mostly on grassy surfaces, vehicles, roofs, and other elevated structures. Roadway snowfall accumulation was limited to lesser-traveled roadways across the Hill Country as well as a few elevated bridges and overpasses along and east of the I-35 corridor, according to National Weather Service Reports, which noted that there were a few minor vehicle accidents and “one major 15-vehicle accident in San Antonio on an icy, elevated bridge.”
Caldwell County Sheriff’s Office public information officer William Miller said the county responded to eight calls Friday morning related to weather.
“Out on SH 130, we had several people who hydroplaned and slid off the roadway, but no major crashes, fatalities or injuries were reported,” Ritchey said.
While classes were closed, conditions had warmed up enough by mid-day to thaw out the area, allowing extracurricular activities and sporting events to go on as scheduled. But with temperatures that hung out in the upper 30s to lower 40s for much of the day, snowdrifts and snow-covered cars could be spotted all over town for much of the day.
“If I’d parked in the sun, I wouldn’t be doing this right now,” laughed Lockhart resident Cleo Cashe just before noon Dec. 8 as he scraped the snowdrifts off the windshield and rear window of his red Kia, which he’d parked downtown in what turned out to be a shady parking spot.
Excitement was visible on social media sites like Instagram and Facebook, where residents from Austin to San Antonio inundated news feeds with photos of their children playing in the snow, postcard-perfect house pictures with snow-covered roofs and lawns, and, of course, digital depictions of the requisite short-statured, muddy snowmen that are a Texas snow day staple.
Lockhart residents who sent photos to the Post-Registers said they saw snow accumulations on their properties that measured up to four inches. The National Weather Service had Lockhart’s official snowfall total at 1.1 inches in the northwestern portion of the community. Luling’s snowfall measured 2.5 inches, the NWS reported.
Snowfall totals ranged from a trace to up to 5 inches across South Central Texas, according to National Weather Service reports. The I-35 corridor and portions of the southern Hill Country generally experienced between 1 and 2 inches of snow, with isolated pockets of 2 to 4 inches.
The San Antonio International Airport officially recorded 1.9 inches of snow, the highest snowfall total since the historic Jan.12-13, 1985 blizzard that produced 13.5 inches. 1.3 inches was officially recorded at Austin Bergstrom International and 0.4” at Austin Camp Mabry, the National Weather Service said on its website.
According to the NWS, the last measurable snowfall recorded in major South Central Texas metropolitan areas occurred on Feb. 6, 2014 at San Antonio International, Feb. 4, 2011 at Austin Bergstrom, and Jan. 22-23 at Austin Camp Mabry.
The Dec.7-8 snow event ranks as the second earliest snowfall on record at San Antonio International (earliest was Nov. 23, 1957) and the 4th earliest for the Austin area (earliest was Nov. 14, 1959) according to reports. 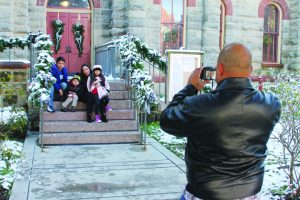 George Diaz takes a photo of his family in front of the Caldwell County courthouse Friday morning as the previous night’s snowfall lingered in shadowy areas. Post-Register readers are apparently avid photographers and many shared their photos with the newspaper.