A winning tradition: With 8 seniors returning, Lions take it a game at a time 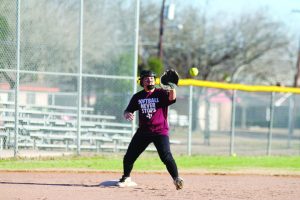 Trinity Castillo, right, catches the ball at third base during a drill. 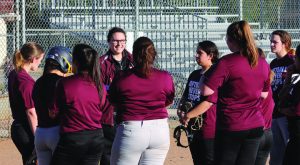 Lockhart head softball coach Katy Snell meets with her team during a Monday afternoon practice. While the Lions have made the playoffs every year of Coach Snell’s 11-year tenure, she said the team plans to just take the season “game by game, moment by moment.”
Photos by Miles Smith/Post-Register

Lockhart High School’s softball season officially kicks off with non-district play on Tuesday, Feb. 13, and expectations are riding high.
That’s nothing new for the program, which has made it to the playoffs in each of head coach Katy Snell’s 11 seasons. And it has reason to be optimistic this year, with eight seniors and a total of twelve players returning to the varsity squad.
Last season, the Lions finished in a three-way tie for second in their district. A coin toss gave them the No. 2 seed. They won a playoff series against Austin McCallum before falling in the second round to the Houston area’s Richmond Foster.
Still, Snell dares not utter the “S” word – state, and would rather not speculate on whether she thinks this year’s incarnation of the Lions softball team has a shot at it.
“They’ve got high expectations, and they’re an experienced group,” Snell said. “But I’m not putting pressure on the children. I will say this – if we stay healthy and can catch a few breaks here and there, we are capable of beating anybody.
“We’re not going to talk about it, though. We’re going to go game by game. Moment by moment. We put a lot of pressure on them last year, and we’re going to scale it back this year.”
Snell attributed the team’s continued tradition of success to, in part, a winning culture and enthusiasm that builds long before her athletes reach high school.
“I’ve got players who, when they were little girls, would come up to me and say ‘Coach Snell, I want to play on your varsity team someday,’” she said. “It’s just a culture of success that we’re trying to build.”
Senior pitcher Amanda White, who will play for Kilgore Junior College next season, will start for the Lions.
Junior pitcher Alyssa Barrientez will also take some reps at hurler.
“She played a pivotal role for us last year,” Snell said of Barrientez.
In addition to White, four of Lockhart’s player will suit up for college teams next year.
Shortstop Alex Hedspeth signed with Stephen F. Austin; first baseman Marina Mils will go to Bossier Parish Community College in Shreveport; centerfielder Gracie Bell will attend Shriners College in Kerrville; and third baseman Trinity Castillo will head to Vernon College.
“Five of our eight seniors will play at the next level,” Snell said. “It’s a big senior class. We’ve signed 24 kids to colleges in the 11 years I’ve been here.”
The majority of this year’s class started as freshmen, Snell said. The last senior-heavy team was the 2013 squad, which advanced to the regional quarterfinals.
The season will not be without challenges. Dripping Springs won District 26-5A last year and advanced to the state tournament. Seguin and Medina Valley also figure to be formidable, Snell said.
“Games against these schools will be very important in terms of our playoff positioning,” she said.
The team will get an early look at stiff competition this year from Feb. 15-17, when it will travel to the Bryan-College Station Tournament, which will include schools from Houston, Dallas, San Antonio and Austin.
The team stormed through tournament play last year, hence the decision to travel to Brazos County early in the season.
“We’re hoping to be challenged,” Snell said.
District 26-5A play begins Tuesday, Feb. 27 at home against Seguin.