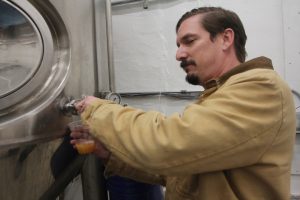 Miles Smith/Post-Register
Caracara Brewing Company founder Mike Mann pours a blonde ale in the back room of his brewery. The beer will be on sale during Hot Rods and Hatters, which kicks off Feb. 2.

A date for a grand opening has not yet been set for Lockhart’s newest brewpub, but beer aficionados will get a chance to taste it on Feb. 2, when Hot Rods and Hatters kicks off.
During the festival, offerings from Mike Mann’s new Caracara Brewing Company – the official beer of the event – will be served at three beer booths located around downtown Lockhart. The brewing company will be pouring an India Pale Ale, a floral wheat and an easy-drinking blonde.
Mann said it was exciting to be debuting the beer to such a large crowd.
“Beer brings people together,” he said. “It is really exciting that I’m going to be able to have something to offer that weekend.”
The beer is being brewed at 100-A East Market Street in Lockhart, where the brewpub will likely open its doors to the public in early spring. Mann, who started making beer years ago as a home brewer, said the brewery would eventually offer what he called left-brained beers and right-brained beers.
“Left-brained beers are the kind that everyone’s expecting,” he said. “The blondes, the IPAs, and the stouts. The right-brained beers are the more experimental beers. They’ll use honey, fruit, foraged local herbs and foraged local fruit. We’ll use an ingredient called the hop tree, which is our local prickly pear cactus, which German settlers first used instead of hops.
“We could also use tea and coffee.”
Those wanting to be the first to sample Caracara will want to circle Friday, Feb. 2 on their calendars. That’s when Mann will be serving beer out of the back door of the brewery during First Friday.
Many of the ingredients are sourced locally, including the water, the barley, the herbs and the water. The name, too, is locally derived: the caracara is a falcon native to the area, and is often seen at Mann’s family’s property in Luling.
Prior to becoming a professional brewer, Mann directed a show called the Beer Diaries on PBS, which interviewed different brewers and visited different breweries. Directing the show and meeting with the brewers inspired Mann to try his hand at It professionally, he said.
“I’d been brewing since 2001,” he said. “Now that the Diaries are over, it’s time to go make beer.”
The decision to pick Lockhart for a brewpub was a no brainer, he said.
“My family’s been in Luling for 25 years, and I’ve been watching this downtown area become rejuvenated,” Mann noted. “A lot of people are moving here from Austin. It’s nice here – slower paced, and it doesn’t have the traffic.”
Besides getting the beer ready, Mann has been working on the brewpub’s seating and serving area. Construction is ongoing daily in the space, which sits at the corner of Market and Main.
Once open, people will be able to drink at the bars or at one of the tables – all of which are being crafted from local pecan wood and mesquite trees by Caldwell County resident and woodworker Tim Auld.
Kevin Sykes is the head brewer, who notably worked at the Whip In in Austin as the head brewer when it was producing its own beer.
After the opening, customers will be able to order beer in glasses or in flights, with different beers being poured into 4-ounce tasting glasses. Beer will also be available to take home.
“We’ll have crowlers,” Mann said. “We can put the beer into cans and seal them.”
Mann said that he wanted his brewpub to become a place for people to gather and hang out, and said he would offer something for everyone.
“I’m not going to release bad beer,” he said. “That’s for sure.”