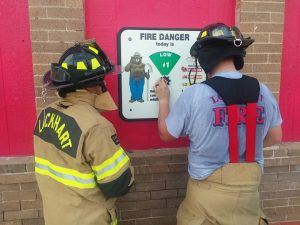 Miles Smith/POST-REGISTER
Lockhart firefighters work to adjust the fire risk dial at the fire station on Church Street. The fire risk climbed this week, leading Caldwell County to reinstate a countywide burn ban for the first time in several months.

Caldwell County Judge Ken Schawe on Thursday reinstated the burn ban, prohibiting county citizens from burning brush and trash after they said conditions had dried up and deteriorated to the point that allowing fires was no longer safe.

“Fire danger now poses an imminent threat,” said Martin Ritchey, director of the Caldwell County Office of Emergency Management. “Vegetative matter has deteriorated to the point that it is now absolutely dry and its fire behavior would be practically explosive.”

The reinstatement of the ban ends a period of several months without a burn ban, with an active hurricane season and wet December keeping ground conditions moist enough to safely allow fires.

“We’ve had a couple of TCEQ burn bans, where we had to temporarily suspend burning privileges because the winds had climbed over 21 mph, but that’s it,” Ritchey said.

But conditions had deteriorated in recent weeks. Ritchey said firefighters had been responding to an increased number of fires in the past several days that had grown in intensity and size.

“There were more instances of fires and they’ve been getting bigger,” Ritchey said. “They’re getting large enough that they’re threatening structures and we’re having to evacuate people from their homes.”

Ritchey said the county tries to institute burn bans only whenever necessary for safety.

“We take a lot of care in putting them in place because we have a lot of ranchers, but conditions leave us no choice.”

Nearby Hays County reinstated its burn ban at its Jan. 16 county commissioners meeting.

Earlier this week, the Caldwell County Commissioners Court on Monday voted not to reinstate the burn ban, saying conditions were deteriorating, but that it was safe to burn as long as people burned carefully and didn’t leave fires unattended.

The area should get some moisture and precipitation in the next couple of days, however. The National Weather Service shows a chance of rain in the forecast on Friday and Saturday.