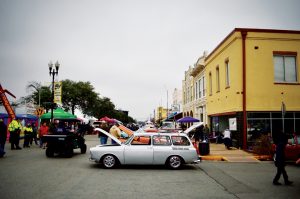 Laurel Coyle / Post-Register
Classic cars line the streets of downtown Lockhart in 2017. Hot Rods and Hatters Producer Joel Gammage says more than 2,000 cars will participate this year at the event, which runs Feb. 2-3.

The seventh edition of Hot Rods and Hatters Car Show Festival is set to kick off on Friday, Feb. 2, and it promises to be bigger than ever.
This year, event producer/founder Joel Aaron Gammage expects downtown Lockhart will be teeming with 2,000 cars, 200 vendors and an estimated 30,000 spectators roving the Caldwell County seat’s historic district.
The show creator said he never expected it to grow so large – it initially began six years ago, when he was planning a birthday party at Manny Gammage’s Texas Hatters, his family’s hat store on Commerce Street.
“It was supposed to be a small, backyard gathering,” Gammage recalled from Seattle, which he now calls home. “It was supposed to be a birthday party, of all things, with Rick Broussard of Two Hoots and a Holler performing. I built a small stage out behind the hat store and was expecting maybe 25 people to show up.”
Twenty-five turned into hundreds. The idea was a rolling stone that seemingly gathered every ounce of moss in its path: Broussard wanted to bring his car and park it out of the shop for people to look at. He said a few friends might bring their cars, as well.
No problem, Gammage thought.
But a local car club caught wind of it. A few cars turned into 15 or 20. More caught wind of it, and it turned into 50.
It got so big he had to file paperwork to get a permit. A Facebook page for the event had more than 1,000 people saying they were going to attend the event. He was going to have to have port-a-potties brought in.
Thus, the car show was born. For a $10 registration fee, car enthusiasts could display their chariots at parking that stretched down the street. Cheese producer Tillamook heard about the event and wanted to shoot a commercial there, and wound up displaying a car.
All told, that first year had 99 cars participating, and an annual event was born. The event moved to the old Cedar Hall before eventually settling downtown, where it has grown in participation every year.
Six years later, Gammage’s enthusiasm for the event hasn’t waned.
“I’ve been up taking phone calls since 4 this morning,” Gammage said on the phone last Friday. “Most of the car guys I know get a pretty early start. It’s a lot of work, but I’m really excited about it.
The nucleus of the event is the downtown historical district surrounding the Caldwell County courthouse, located at 110 South Main Street.
Additional public parking with shuttle bus service from the city park to downtown will be available all day on Saturday. The show is free to spectators.
Friday night features First Friday shopping by the Lockhart Chamber of Commerce, along with live music by Danger Cakes at Caracara Brewing Company and The Phantom Shakers at Henry’s Restaurant.
The main event on Saturday is the car show. This year, awards will be given out through donation based crowd voting. Adults can vote on the People’s Choice Awards by making a donation of five dollars. Kids can vote on the Kids Choice Awards through a donation of two dollars. Proceeds from voting will go to Hot Rods for Homes, a non-profit organization dedicated to repairing and rebuilding homes for families in need of assistance.
Gammage said he started the organization to benefit the community after he realized the show had grown too big for traditional judging.
“The mission of Hot Rods for Homes is to celebrate, create and strengthen the bonds between people across communities, to embolden the family spirit of giving and genuine caring for those in need,” Gammage said. “By allowing people to vote for their favorite cars with donations, it gives fans more input into our winners, while at the same time impacting the lives of families and fixing homes that are in serious need of repair. It’s a win-win for everyone.”
Free live music will run all day Saturday. The music lineup includes Dale Watson and His Lone Stars, Rick Broussard’s Two Hoots & A Holler, The Paladins and The Octanes.
Cost to register a car is $25 online or $30 at the gate on the day of show. Veterans can purchase a discounted entry of $20 dollars online in advance.