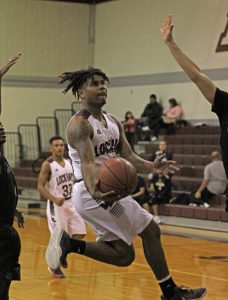 Austin Garcia drives to the hoop for Lockhart in a close home loss against Seguin. Despite a
losing streak, the boys have been competitive in most of their district games, head coach Josh Billo says.
Miles Smith/Post-Register

The Lockhart Lions went 0-2 in district play last week, falling to Boerne Champion 73-35 on the road on Friday after a short rest following Wednesday’s rescheduled home game against Seguin.
Lockhart led 8-5 after the first quarter, but Champion pulled away in the second quarter to take a 31-18 lead it would not relinquish.
Point guard Adam Romero powered the Lions with 12 points. Jordan McKinney added eight.
The boys fared better at home against Seguin, nearly pulling out a win after an 8-0 run in the fourth quarter, but ultimately fell 51-44.
Kourtien Zambrano scored 19 points, Devon Clark added 8 and Logan Schnautz tallied 6.
The Lockhart Lady Lions stayed afloat in the playoff race on Friday night, pulling out a 47-42 win at home against Boerne Champion.
Kara Pickle went off against Champion, tallying 22 points to lead the attack. Princess Daniels tacked on 7 points and added a rebound and two assists.
The Lady Lions surged to a 13-5 lead in the first quarter and improved that to a 29-12 advantage by halftime. Boerne surged back into the fight in the second half, outscoring Lockhart 30-18.