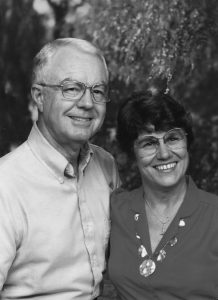 Curtis Charles Franks Jr., 92, died on Monday, March 5, 2018, while sitting in his favorite chair at home in Fair Oaks Ranch, Texas and surrounded by people who loved him.
His death ended a long struggle against the crippling effects a stroke in July 2013 that robbed him of speech and mobility but could not destroy the basic goodness that made him widely loved.
His wife of 71 years, Betty Jean Franks, preceded him in death last April. For most of their time together, they enjoyed a wonderful life that combined the best of work, fun, family and friends.
Curtis was born on December 12, 1925 in Lockhart, Texas to Curtis Charles Franks Sr. and Lillie Belle (Williams) Franks and had a difficult childhood marred by economic uncertainty and the death of his father when Curtis Jr. was just 13.
In high school Curtis fell in love with the then Betty Jean Lewis, who like him had lost her father at a young age. Dock Lindsey Lewis was killed in a car wreck when Betty was 12.
Whether a sense of shared trauma helped bring them together we will never know, but we do know they were completely dedicated to each other for their rest of their lives.
In the summer of 1944, Curtis, 18, joined the Marines, fought in World War II – including on Okinawa, the bloodiest battle in the Pacific — returned home and married Betty on July 10, 1946.
Taking advantage of federal benefits for returning vets, Curtis got a geology degree from the University of Texas then embarked on a long career in oil and gas, mostly with Halliburton or its subsidiaries, that took them to Alice, Houston, San Antonio and finally Fair Oaks Ranch.
He and Betty had three children – Gary, Kerri and Jeff — who they guided through the triumphs and travails of youth, took on wonderful summer vacations and sent off to college with varying degrees of success.
They were a happy, popular couple who enjoyed traveling, socializing with friends and dancing the night away, a favorite activity they had done since the beginnings of their relationship, particularly at weekend dances on the hilltop pavilion at Lockhart State Park. In later years, their favorite place was the San Antonio Petroleum Club of which Curtis was a founder and former president.
Their long life together ended late last April when Betty died of heart failure at 91. But Curtis kept her memory alive until his death by surrounding himself — in his favorite chair, a big brown recliner –  with pictures of her and their family in happier times.
Curtis was an intelligent, warm-hearted man of great integrity who was loved and respected by all who knew him. It’s not an overstatement to say that, like his beloved Betty, he will be greatly missed by many people.
Curtis is survived by three children and their spouses: Gary C. and Shiela Franks, Kerri and Tom Blanton, Jeff Franks and Elena Vega; by grandchildren and spouses Michael Blanton, Spencer and Barbara Franks, Jeff Blanton, Heidi Franks and their step granddaughter Lauren Gregory; by their great grandchildren: Hallie Blanton, Kaylee Blanton, Olivia Franks and Preston Franks; and numerous nieces, nephews and cousins.
Honorary pallbearers include Michael Blanton, Spencer Franks, Jeff Blanton, Scott Stueve, Richard Eyster, Chip Rountree, Brad Rountree and Curt Lewis.
A special thanks to caregivers Charlotte Washington, Christine Ramirez and Matthew Gonzales and all those who preceded them for taking good care of Betty and Curtis. They also include the beloved Kitty Cat, who gave Betty and Curtis much comfort in difficult times.
A memorial service for Curtis will be held on March 17 at 11 a.m. at McCurdy Funeral Home in Lockhart.
To view and sign the guestbook, visit https://post-register.com/obituaries/Curtis-Franks