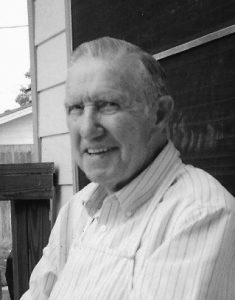 Henry LaVerne “Verne” Schaefer passed away at Chisolm Trail Nursing Home in Lockhart, Texas on January 26, 2018. He was born Nov. 5, 1933 to Gladys and Henry Schaefer in San Marcos, Texas.
In 1954, he was drafted into the Army. He completed his service in 1956 and then enrolled in Texas State Teacher’s College. In 1959 he graduated with a Bachelor of Science degree in Education. In 1958 he married Janet Nolte. This marriage of 60 years was just celebrated on January 4, 2018. In 1963, Janet and Vern had Raegan, their only child. After graduation Vern went to work for Goodyear Tire and Rubber Co. He worked for Goodyear for 28 years until the company closed the Lockhart store. He then bought the dealership with a friend of the family. They ran the dealership for 10 additional years. After retirement, Vern worked part time at Kruez market, some of this time alongside his grandson. When Vern wasn’t hard at work, he enjoyed nothing more than hunting and fishing. He loved teaching his two grandchildren to fish at the pond.
Vern is survived by his wife, Janet; daughter, Raegan Frey; son-in-law, Brad Frey; grandson, Jacob Frey, and granddaughter, Taylor Frey.
Services were held at the First United Methodist Church, in Lockhart Monday Jan. 29, 2018. In lieu of flowers, donations can be made to First Methodist Church or the charity of your choice.
Arrangements are under the care and guidance of McCurdy Funeral Home, 105 E. Pecan, Lockhart, Texas, 78644. Obituary and guestbook online at www.mccurdyfuneralhome.com
To view and sign the guestbook, visit https://post-register.com/obituaries/Henry-Schaefer