Taylor kicker Ryan Hanson’s booming kicks weren’t the difference maker that gave the Ducks their first win of the season over visiting Lockhart on Friday night.

It was his well-placed squib kick with just over two minutes to play in the rainy non-district game that completed the 20-point comeback, a 30-29 win that left both teams with 1-1 records.

A 1-yard touchdown run by Taylor starting running back Jailen Teiler with 2 minutes to go trimmed Lockhart’s lead to 29-23 – no problem if they could get the ball back and rely on the the high-powered rushing attack that had amassed 388 yards and all four of the Lions’ touchdowns. But they’d never get the chance, backing away from an onside kick that looked certain to slip out of bounds before traveling the required 10 yards needed for the kicking team to touch it first and recover it.

But it didn’t slip out of bounds. Taylor recovered the ball and needed just 1:36 to score the go-ahead touchdown on a Cole Harms pass to Teiler, who grabbed the ball in the back of the end zone to erase the Lions’ lead and earn the Ducks their first win in their new stadium.

“That kid is a Division 1 kicker,” Lockhart head coach Brian Herman said of Hanson, a linebacker-sized punter and placekicker who kicked a 37-yard field goal in the third quarter and managed a 47.4 yard average on four punts.

The Lions had managed to overcome early gaffes in the game to grow their lead to 29-10 with 4:53 to play in the third quarter. Lockhart QB Jayden Garza threw a pick in the end zone in the first quarter that snuffed a red zone drive, and Lions’ running back Jesus Aldana muffed a punt in the second quarter with the Lions trailing 7-0.

But Lockhart recovered quickly after the turnover on special teams. Lions’ WR/DB Devin Clark picked off Harms on the sideline, giving the visitors some momentum and some life. The Lions went for it on fourth down and kept the drive alive for running back Daequan Ellison, who scored from 58 yards out to tie the game.

The score was the first of four for Ellison, who also found the end zone on runs of 51, 43 and 5 yards while carrying the mail 26 times for 247 yards.

Read more about the Lions’ loss to Taylor and a preview of their final non-district game in Thursday’s Post-Register. 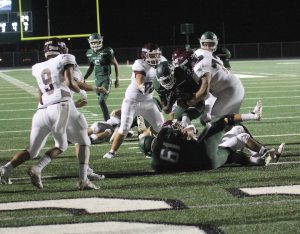 Jailen Teiler dives toward the goal line for the Taylor Ducks as he is mobbed by Lockhart defenders in the fourth quarter of the Ducks’ 30-29 win over Lockhart. Miles Smith/LPR