In a 1:30 p.m. conference call, NOAA meteorologist Paul Yura noted the massive storm sweeping across Texas has been downgraded to Tropical Storm Harvey, and has effectively stalled in his march across the state.

“It’s going to be staying here for several days, possibly through Wednesday,” he

said “And as the wind threat decreases, we’re going to be looking at more of the catastrophic flooding event.”

Yura’s estimates still indicate that Harvey could dump up to 30 inches of rain in some areas of South Central Texas, specifically southeast of Caldwell County. However, Caldwell County could stand to receive more than 15 inches in isolated areas, with averages through Wednesday estimated at 12 inches.

“Never in my career have I seen a hurricane stall like this, for this long a time,” he said on the call. “Usually they make landfall and are carried off by some other system, so the danger here is the amount of time that the storm is going to stay.”

He said as Saturday afternoon progresses, he is hopeful that the National Weather Service will be able to start “knocking down” some of the warnings and watches, particularly the Hurricane and Tropical Storm wind threats. However, Flash Flooding Warnings will remain in effect throughout the weekend, and possibly as long as Wednesday, as Harvey’s rains seek somewhere to go.

River flooding estimates are based on a three-day model, showing the likelihood of heavy flooding in the Guadalupe, Colorado and San Antonio River Basins.

Caldwell County officials, however, are on high alert that rains falling not only in Caldwell County, but in the Hill Country, could have massive impacts on the Blanco and San Marcos Rivers.

Yura said that if the rains move toward the west, the river basin flooding models could increase significantly.

Yura estimates the next NOAA update by 5 p.m. on Saturday.

Post-Register staff is on site in the Caldwell County Office of Emergency Management and will keep the public updated of changes and dangers in this volatile situation. 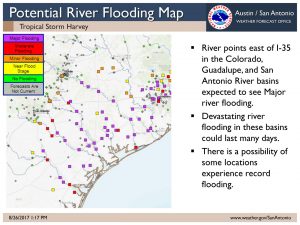